Lewandowski’s rise takes him to CL final, against his next club? 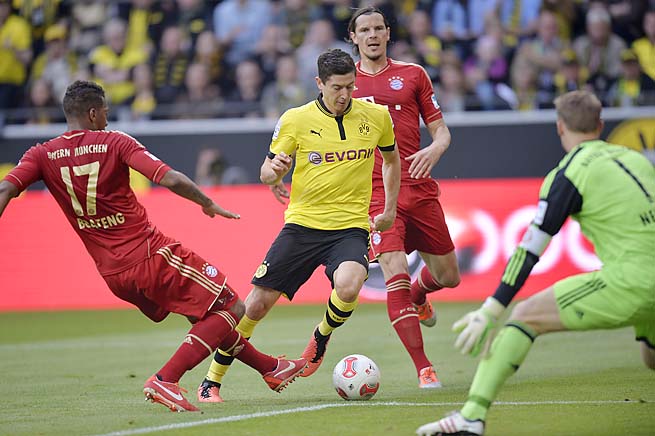 Robert lewandowski had 24 goals in bundesliga play this season, second in the league.

Robert Lewandowski, the story goes, was named with greatness in mind. Krystof Lewandowski, a Judo champion and second-division football player and his wife, Iwona, a volleyball player, wanted their son to have a first name name that foreign journalists and supporters could easily pronounce. Twenty-four years later, the Borussia Dortmund forward is indeed on the verge of becoming universally recognized.

“If Lewandowski plays as well (as he did against Real Madrid in the Champions League final) on Saturday, people will note it in deepest Africa and the most remote regions of South America,” former Bayern and Germany midfielder Lothar Matthäus said this week. Ottmar Hitzfeld, who won the Champions League with both Borussia Dortmund (1997) and Munich (2001), feels that the forward “has already written history” with his four goals against Madrid in the semifinals and might even have “a good chance” to get crowned European Footballer of the Year — if he were to score “two, three goals” at Wembley.

In a team that has more or less come from nowhere — or from successive failures in the Europa League and Champions League group stages, to be precise — to the top of European football in the space of two years, Lewandowski’s development has arguably been the most spectacular.

As an 18-year-old, he was released by Legia Warsaw’s youth team; “they told him he wasn’t strong enough,” his agent, Cezary Kucharski, told spox.com in 2010. Lewandowski had to move to third-division outfit Znicz Pruszkow to get some game time, but he couldn’t be kept down for long: his 15 goals helped the club to a promotion. A year later, he was picked up by Ekstraklasa club Lech Posen. Fourteen goals in his first season in the top flight in 2008-09 alerted Dortmund scouts. But sporting director Michael Zorc and coach Jürgen Klopp weren’t quite convinced yet.

“He looked lightweight to us,” said Klopp.

Lewandowski had plenty of talent and technical skill, but he was missing too many chances.

The Bundesliga club decided to watch Lewandowski for another season before making a bid. Luckily for him, 2009-10 turned into his breakthrough campaign in Poland. He scored 18 goals to win the top scorer trophy and the championship with Poznan. Now, Dortmund couldn’t wait any longer. In the face of interest from England — Blackburn Rovers’ Sam Allardyce came reportedly close to signing him — the Black and Yellows bought him for €4.5 million. That was seen as a quite expensive fee at the time.

Lewandowski was a regular in the sensational title-winning season of 2010-11, but his impact was limited. Klopp played him as a No. 10 or second striker behind Paraguayan poacher Lucas Barrios, and the reviews weren’t great: local papers described him as a “Transferflop” and “Chancentod” (the death of goal-scoring opportunities). Only once Barrios picked up an injury at the Copa America in the 2011 offseason did Lewandowski become the main man upfront.

The transformation was almost instant. The tall, mobile and muscular striker — Nuri Sahin gave him the nickname “the body” — was the perfect outlet for Dortmund’s direct, transition play. He scored 22 league goals, the 2011-12 season saw him and the team reach a whole new level, and the campaign ended with him scoring a hat trick in the 5-2 destruction of Bayern in the German Cup final. Alex Ferguson watched him win Borussia’s first-ever double that day.

The Scot was keen to bring back Shinji Kagawa and Lewandowski to Old Trafford in a package deal — Dortmund said no in the latter case. Another 24 goals for the club later, it’s become all but impossible to hold on to “the most complete striker in the Bundesliga” (Franz Beckenbauer) for much longer, however, irrespective of the outcome of the match. Lewandowski has refused to sign a contract extension beyond 2014 and reportedly told Zorc that his mind is set on joining Bayern.

Whether Dortmund will draw a line in the sand and make him stay against his will for another year or plump for the more tempting option to release him for €25-€30 million remains to be seen. But the injury to Mario Götze, who will join Munich in the summer, hasn’t made life easier for “the most exciting Polish player of the last 20 years” (Klopp). All the speculation of Götze’s mixed loyalties will now attach itself to Lewandowski in this final, like a particularly bad stench. The fact that his two agents will attend Bayern’s post-match party is not that helpful, either.

“I told him that he’d better not come to the changing room without the freaking trophy in his hand,” said Klopp last week, only half in jest.

The pressure on Lewandowski to perform will be immense; it would be bad enough without the transfer affair. Dortmund’s dedicated penalty taker missed a spot kick against Bayern keeper Manuel Neuer in the 1-1 league draw three weeks ago, and in center back Dante, he’s up against the most consistent defender in the Champions League this season.

“I have to watch him, he is the best striker in the world at the moment,” said the 29-year-old Brazilian generously.

Dante went on to say that Götze might have found it “psychologically difficult” to play against his future club, while Bastian Schweinsteiger mused that “a man of his quality will certainly have another chance to play in a Champions League final.” With Bayern, he meant. Both things are probably true when it comes to Lewandowski, as well. If he were to overcome all the off-pitch obstacles as well as Bayern’s mean back four with only a fraction of the brilliance he showed against Real Madrid, even the most ardent Lionel Messi and Cristiano Ronaldo supporters in deepest Africa or most remote South America, could be moved to lend him his vote.

The man who moved a mountain Was the one who began carrying away small stones. - Chinese Proverb
Tweet this Quote!