Gold Cup win opens up horizons for a U.S. side in fine form 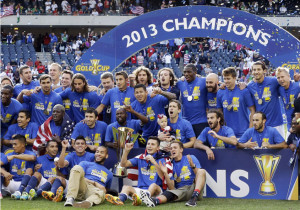 CHICAGO — I have studied U.S. coach Jurgen Klinsmann closely over the last 22 days covering the CONCACAF Gold Cup, and I have learned something. Whenever he uses the word benchmark, he is about to say something interesting, something candid, something that cuts through the double-speak you hear in most press conferences.

July 14, Sandy, Utah: “We are very well aware of Costa Rica, and [the Ticos] are the first real benchmark for us.” (Translation: “Belize and Cuba were tomato cans.”)

July 24, Arlington, Texas: “I told [Landon Donovan] that in our conversations: I’m measuring you. Your benchmark is the best Landon Donovan ever. I’m not taking anything less than that.”

The man who grew up using Deutschmarks handed out benchmarks like little pieces of gold as the U.S. dominated its way through the Gold Cup. And after Sunday’s gritty 1-0 win in the final against Panama, Klinsmann went back to his piggy bank, pulled out three benchmarks and used them to artfully put into perspective the U.S.’ first Gold Cup title since 2007.

I had asked him if, with the U.S.’ all-time-record 11 straight wins, including World Cup qualifiers and the Gold Cup, was his team where he’d wanted it to be at this point as they progress toward World Cup ’14?

“We all know that there are different benchmarks out there,” he finally said. “The global game is played in South America and it’s played in Europe, and there are a lot of other benchmarks waiting for us. But I think it’s important over time that you see progress from the group, that they all understand it takes a lot more to become really good.”

“So a month from now we’re already talking about World Cup qualifiers and the next benchmark,” he continued. “But I think today they deserve the biggest compliment. They gave me a nice champagne shower. And we will enjoy this moment because those moments are also there to celebrate.”

Translation: The U.S. players did everything we asked of them during the Gold Cup, and they earned the right to revel in their success here over the past three weeks. The U.S. was the best team in the tournament by a mile, and this no-diva crew played effective soccer and accomplished their objective. Don’t underestimate the good vibes that result from this tournament. And please: Let’s enjoy this for at least 24 hours.

But back to benchmarks. If you think this Gold Cup is anything like what the U.S. will see in Brazil, then think again. And if the U.S. is to have realistic hopes of doing some damage next year, then the next steps need to be taken, by both players individually at club level (which starts now) and by the U.S. as a team when it meets a good Bosnia-Herzegovina team in an away friendly next month and restarts World Cup qualifying in September.

What’s exciting, though, is that the building blocks are there for some benchmark reckoning. With the resurgent Donovan who we saw in the Gold Cup, the U.S. team that was perfect in three June qualifiers without him gets an immediate upgrade for September. Klinsmann finally admitted what everyone else already knew after Sunday’s game when he said: “There’s a high probability that [Donovan] joins us for the September games.”

Those games happen to be tough ones. First comes a road qualifier at Costa Rica, where the U.S. has always struggled and the home fans are aching to give Tío Sam some payback for March’s Snow Clásico in Denver. Then comes the big one at home against archrival Mexico in every Mexican fan’s most feared place: Columbus, Ohio. I think Donovan has a chance to start as soon as the game in Costa Rica, and if he does I suspect it will be as a left midfielder, pushing Fabian Johnson into a competition at left back with DaMarcus Beasley.

Surrounded by even better teammates than he had during the Gold Cup, a hungry Donovan could push the U.S. toward another of Klinsmann’s benchmarks. Getting a result in Costa Rica and perhaps clinching a World Cup berth against Mexico wouldn’t be a bad start.

Meanwhile, this Gold Cup has given playing time to a few U.S. players whose stock is rising as a result. I’m talking about Eddie Johnson, Mix Diskerud, Joe Corona and Kyle Beckerman. I had included Stuart Holden on this list as well, though now we’ll have to see how he handles another knee injury sustained on Sunday that Klinsmann feared was serious.

In any case, Klinsmann now has to make some tough decisions as he pieces together his next World Cup qualifying squad. But in the wake of a triumphant Gold Cup, he can be thankful that his options are increasing by the day.

On to the next benchmark.

The man who moved a mountain Was the one who began carrying away small stones. - Chinese Proverb
Tweet this Quote!