The greatest difference between our children’s sporting experience and our own is the rise of year round, sport specific organizations that ask – even require – season after season of participation in order to stay in the player development pipeline. The pressure to have your child specialize in a single sport at a young age has never been stronger.

As a result, parents ask me all the time “When should my child specialize in one sport?”

When I tell them what the science says to wait, many tell me “That’s not possible. If my child does not specialize early she will be left out, not make the travel or high school team, and have no chance of playing in college. You live in a fantasy world.” They tell me about coaches who have told them they need 10,000 hours of organized, structured practice, and their fear that other kids will be getting a leg up on theirs if they do not specialize. They are stuck in a downward spiral that is detrimental to their children, but feel helpless to change course.

In the words of Kirk Anderson, Director of Coaching Education for the US Tennis Association:

“Even if parents and coaches know and understand age-appropriate principles for children, I think they would be reluctant to accept them because they would fear their child would fall behind the kid in a more structured program that focuses on training, competition and deliberate practice.”

This fear has forced kids into sports that often are not of their own choosing, and in many cases compels them to remain in activities that are not enjoyable, not intrinsically motivating, nor are congruent with their actual athletic abilities. This path fails to consider many of the physical, emotional and social costs to children who only play a single sport.

There is a different path. It is the one based in science, psychology and best practices of athletic development. It is one that serves the needs of children for a lifetime, reduces injuries and burnout, increases enjoyment and motivation, and produces better athletes. Sound appealing?

It is the path of multiple sport participation and less structured play.

But don’t take my word for it. Below are some eye popping facts and statistics that should make every parent think twice about early sport specialization in sports like football, soccer, baseball, hockey and basketball, where athletes peak in their 20′s. (sources at the end of the article).

First, here are four research excerpts that demonstrate how early specialization may negatively affect your child:

If that is not enough for you, here are six research based reasons for multi-sport participation: 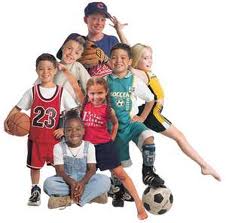 An additional thought is provided by top youth sports researchers Jean Cote and Jessica Fraser-Thomas. They suggest that at no time should a young athlete participate year round in a single sport. While they recommend that athletes in sports whose competitors peak after age 20 need to accumulate around 10,000 hours of general sports participation, no more than half of that needs to be deliberate practice of their chosen sport. As a general rule they recommend the following age breakdown for athletes trying to achieve elite status in a specific sport:

How Do You Approach People with this Information?

Every adult involved in youth sports will come up against people who advocate for single sport specialization. Some think their child is the next Tiger Woods, the next Venus Williams, the next Lionel Messi, so they are getting in their 10,000 hours. Others are afraid to go against the grain, and fear that they are disadvantaging their own child by not specializing. Hogwash!

I meet these folks too, and I blind them with the science. I then ask for the data and research that supports their theory. Cue the cricket noises, because it does not exist.

If you know these folks, send this to them. Post it on Facebook. Send it to your club director and your coach who thinks you should skip grandma’s 90th birthday because your U11 team has your fourth tournament of the summer that weekend (this is an actual call I took by the way).

Of course, this will not work all the time, or even most of the time. Visit your local airport smoking lounge to see the effect an abundance of science on the hazards of smoking has on many folks. But who cares, present it anyway!

At some point, parents need to ask themselves “Are we ready for a better alternative?” Does my 10 year old really need to keep playing 11.5 months of soccer a year in order to have a chance of success? Am I really doing him a disservice by making him play multiple sports, and trying to help him find one he is passionate about?

I think we are ready for an alternative. I think people are sick of 11 straight months of 6am trips to the hockey rink, and weekend after weekend of expensive out of town soccer tournaments for “elite” 11 year olds. I know I am not alone in thinking this.

Aligned against us are a few people who stand to profit from promoting the mythology surrounding single sport specialization. Not scientists. Not researchers. Not top coaching minds. Profiteers, often backed by parents and coaches living out their own unfulfilled sports dreams through the children.

I like the company I am keeping these days. For the sake of our kids, I hope you will join me.

Sources for this article included:

Michael Sagas, “What Does the Science Say About Athletic Development in Children?”  University of Florida Sport Policy and Research Collaborative

Obstacles are those frightful things You can see when you take your eyes off your goal. - Henry Ford
Tweet this Quote!