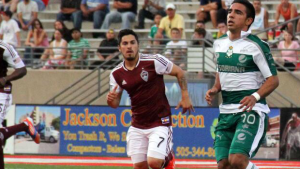 Albuquerque, New Mexico – The Colorado Rapids fell by a 2-1 score to Mexican First Division club Santos Laguna in Albuquerque, New Mexico on Friday night in an international friendly match. Kevin Harbottle curled a 30-yard free kick into the top corner in the 12th minute, but Santos struck back five minutes later before scoring the game-winner in minute 77. The match was played front of an energetic, largely pro-Santos crowd at the University of New Mexico’s University Stadium.

Harbottle’s goal was impressive, as he got both power and accuracy on his left-footed strike from 30 yards out in the middle of the field. The Chilean winger’s shot cleared the wall before eluding both a defender and goalkeeper Oswaldo Sanchez to find the top corner of the near post. The crowd gave Harbottle a loud ovation as the Rapids celebrated the goal.

MORE: Pickens on his return to action: It feels good being back out there

Santos came back minutes later when a long ball was played over the top of the defense to forward Alonso Escoboza, who brought the ball under control before lofting a shot over Matt Pickens from a tough angle to tie the game. Both teams had chances on headers before the end of the half, but Santos’ Eduardo Herrera and Colorado’s Jaime Castrillón both put their shots directly at the opposing goalkeepers.

The second half saw fewer chances for both teams, and was even in terms of possession for the first 15 minutes of the second session. By the 64th minute, Santos had changed all 11 players that started the match, and with the Rapids having just five field players to enter as subs, the Mexican side took advantage of the fresher legs. Another breakaway gave Santos the 2-1 lead with 13 minutes remaining when Nestor Calderón got played behind the defense and finished calmly past Pickens.

For Colorado, the match got several players valuable minutes against quality competition, especially goalkeeper Pickens, who played his first match since suffering a broken arm on March 16. Pickens made several saves, and also ventured into traffic to catch and punch clear Santos crosses. The Rapids also played the final 15 minutes with all three of the team’s Homegrown Players on the field, with Davy Armstrong, Shane O’Neill and Dillon Serna all playing in the match.

The Rapids now turn their attention back to the MLS regular season, with the New England Revolution visiting Dick’s Sporting Goods Park next Wednesday, July 17 at 7:00 p.m.

I start with the premise that The function of leadership is to produce more leaders, Not more followers. - Ralph Nader
Tweet this Quote!